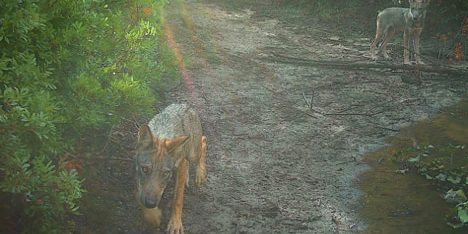 Wolf Cubs seen outside Rome for the first time in over a century!

For the first time in over a century wolves have been spotted in a nature reserve just outside of Rome. This is an exciting time for many who are happy to see the city’s mythological icon return to the area. Legend has it the city owes its founding to a kind and motherly She-Wolf who rescued and raised the city’s founders, twins Romulus and Remus when they were infants.

The twin cubs (perhaps the universe’s wink at Rome’s founding myth) were captured by the hidden cameras of LIPU’s oasis nature reserve as they drank from a watering hole and seemed to romp through the underbrush. Biologists believe at least four wolves are living in the reserve: the two cubs and their parents.

In a statement released by Fulvio Mamone Capria, President of LIPU, he proclaimed his excitement at this “extraordinary event that we are honored to be able to accommodate in our oasis.” Alessia De Lorenzis, the professor monitoring the pack, explained to The Telegraph, “this is the first time in more than 100 years that wolves have been found living near Rome. We’re very pleased that they are back.”

In spite of their historical and symbolic significance, across Italy (as well as across the globe), wolves have been on the verge extinction until recently. According to Life WolfAlps, a conservation group in the E.U., from the eighteenth century through the 1960s, wolves were “considered a pest and exterminated in Central Europe…the wolf has undergone a gradual eradication…from Eastern Europe and the Alps.” In Italy, a small population survived, confined to an area south of the Po River.

It wasn’t until 1971 that wolves received protected status both nationally and internationally, and the population has been slowly revering since. According to The Telegraph, scientists believe there are now as many as 2000 individuals across Italy, “with strong populations in the Apennines and in the Alps.”

Samples of the wolf pack’s excrement have been analyzed and scientists believe the animals pose no threat to any nearby livestock because the findings show “their diet [is] made up exclusively of wild boar, which roam the countryside in large numbers.”

This is good news for many conservationists as there have been calls across parts of Italy as recently as February of 2017 demanding permits to legally cull at least 5% the recovering wolf population.

Gudrun Pflüger, a large carnivore expert for the European Wilderness Society stated the problem plainly: “this is a total failure not only of the bureaucrats but also of the scientific community and the NGOs in Italy. Italy was a best practice example on how to support and manage the return of the large carnivores. The concept, that the Wolf is a protected species in the EU, is becoming a farce. Why do we have European Legislation, if any country can override them and decide that the Wolf can be hunted and killed?”

The Telegraph reported earlier this year that the Italian government “wants to expand existing programmes that strive to make co-existence between man and wolf possible, including compensation for farmers whose sheep, goats and other domestic animals are killed, and money for electric fences to keep wolves away from livestock.”

But many rural residents have begun taking matters into their own hands. Several wolves have been illegally shot, macabrely mutilated, and then gruesomely displayed outside Italian villages and towns as a form of protest by farmers in the region. In Tuscany alone, there was a reported 1.2 million euros’ worth of damage caused by wolves to flocks and herds in 2016. Tulio Marcelli, the regional president of the Coldiretti farmers association, told The Telegraph, “we don’t hate wolves, we just want to save our sheep and cattle, and our livelihoods.”

Though no decisions have been reached yet, this is an issue for environmentalists, conservationists, and animal lovers alike to keep a watchful eye over. If you want to voice your concern and help these protected creatures, the WWF Italia has set up a petition against the cull, and are currently just shy of raising 200,000 signatures.